“If we don’t get three inches, man, Or four to break this drought, We’ll all be rooned,” said Hanrahan, “Before the year is out.” – John O’Brien, Australian Poet

Considering the huge variance in weather over the past 12 months in Australia, where extreme drought, horrendous bushfires and now flooding rains have all impacted not only rural communities but also those in the “big smoke”, the above words of Australian bush poet John O’Brien is more apt than ever before. Australia is both blessed and cursed being an island continent. The vast amount of productive land per capita means we have been a net food and rural produce exporter since European colonisation, but this ability to produce food and goods, demanded by the rest of the world is dependent on water. Australia’s curse is that it is also the driest continent on earth and as such, agricultural producers and rural communities are at the mercy of the weather, in determining their levels of productivity and quality of life. The development over the past 40 years of Australia’s water markets is now central to many agricultural sectors. Investing in “water” is now well established in Australia, as water rights have been separated from land entitlements and can be freely traded in an open market which is designed to not only support agricultural productivity, but also environmental and human needs as well. The Australian water market has both government and private participants. The Federal Government is the major buyer, securing water for human and environmental needs. The level of discussion and debate on this point is very polarising with no right solution suiting all parties’ interests. The other player is the private sector, whether they be domestic or offshore, who purchase entitlements primarily for the use in agricultural sector. The Australian water market is made up of two separate and tradeable property rights: In wet years, high security entitlement holders may get 100% of their entitlements while General Security holders may achieve similar allocations. In dry years however, things change, with High Security holders getting circa 70-100% allocation, whereas General Security holders may get as low as zero to say 40% allocation. The number and volume of water entitlements in Australia is capped, and the water contained is insufficient to irrigate all available land. The water market is designed to allow irrigators with a higher capacity to pay for water, usually determined by the gross margin per unit of water for their crop being higher than an alternate irrigators, can outbid other users therefore driving water use towards the best economic use over time. 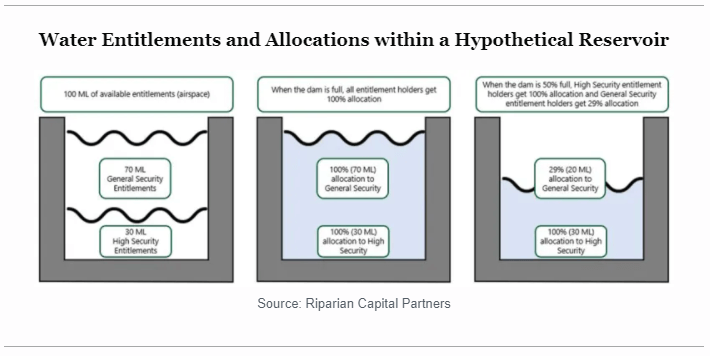 The use by private sector farmers/irrigators can be broadly split into two categories. Those farmers that plant permanent or perennial crops such as nuts, citrus and vines and those farmers that plant annual crops such as wheat, cotton and oilseeds. Businesses that plant permanent crops traditionally require a guaranteed amount of water each year to keep the plants alive and to produce a crop, irrespective of the prevailing commodity price at the time. Businesses that plant annual crops like cotton growers and wheat farmers, can determine each year whether they wish to plant a crop that year and as such their demand for water is more variable. The type of crop being produced in general will determine whether or not the business will buy a high security entitlement (at a higher price) or a General Security Entitlement at a lower price. Entitlements are one thing, but buying and utilising water is determined by the water allocation market. The dryer the conditions the higher price users will pay for water and conversely the wetter the conditions the lower the water allocation price per megalitre.

As can be seen on the chart above on the trade allocation history, the significant drought from 2018 through to the February 2020 had a meaningful impact on water prices. Since the break in the drought post the devastating bushfires, water prices have fallen, with focus now being on the forecasts for the remainder of the 2020/2021 season. Decisions on whether annual croppers’ plant will impact prices. Soil-moisture, carry over entitlements and future water allocations all play a part in determining whether an irrigator plants a crop. Cotton farmers make their decisions on a spring planting in August. The importance of water cannot be underestimated. During the 2018/2019 drought, northern NSW cotton growers received 0% allocation of their General Security water entitlements and the resulting crop production fell by more than 50%. Cotton is no doubt the largest user of water by volume, but that is primarily due to the vast swathes of land planted to cotton as the chart below illustrates. 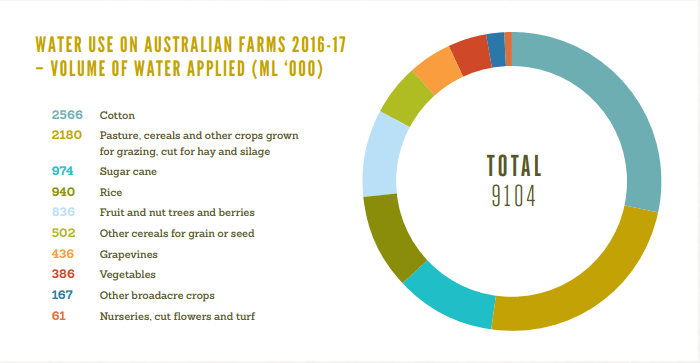 When comparing water usage by crop on a per hectare basis, the picture changes with permanent crops like almonds and citrus and wine dominating the water requirement table. 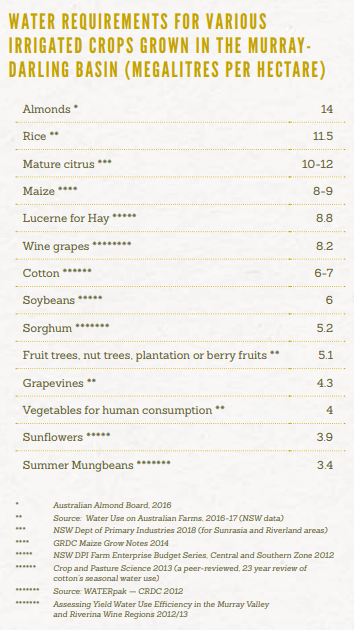 To understand the impact significant rainfall can have, one only needs to look at the water storage in our major cities. Water for our major cities is important, but our livelihoods do not depend on it like our rural communities do. The table below shows the impact of the strong seasonal rains in the urban system. The change in Sydney is dramatic, while Perth is still under pressure. If Sydney was a regional agricultural community, the drought experienced 12 months ago would have seen 95% of all inhabitants without any income at all. We should all think about that when we take a shower, wash our car and manicure our lawns, or complain when job keeper cuts eventually come, while farmers are struggling to employ domestic workers to harvest their fruit crops.

The outlook for future rainfall for Australia for the remainder of 2020 is looking optimistic. The Bureau of Meteorology predicts that October through to December is likely to be wetter than average for most of mainland Australia and North west Tasmania. The level of accuracy of BoM forecasts’ is running at between 50 and 65% over the period to end of January which leaves plenty of scope for change. 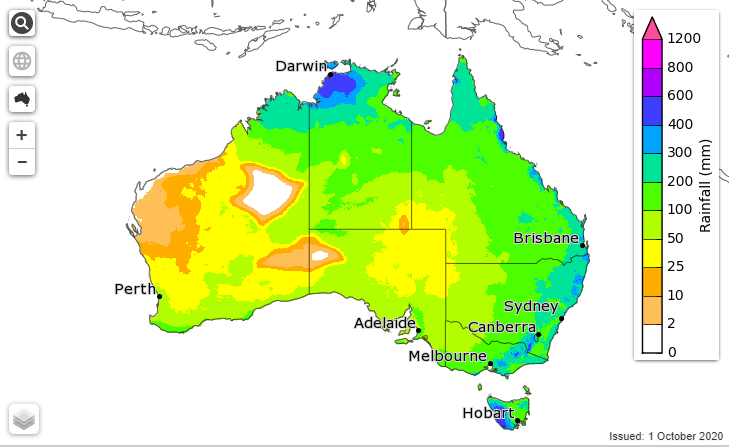 How this all affects the water market remains to be seen. Additional rains may see water allocation prices fall further from the current $200 per megalitre, while High Security entitlements prices should still remain strong as additional permanent crop plantings in the southern Murray Darling Basin, along with the recent memory of the drought and its impact on prices remain.