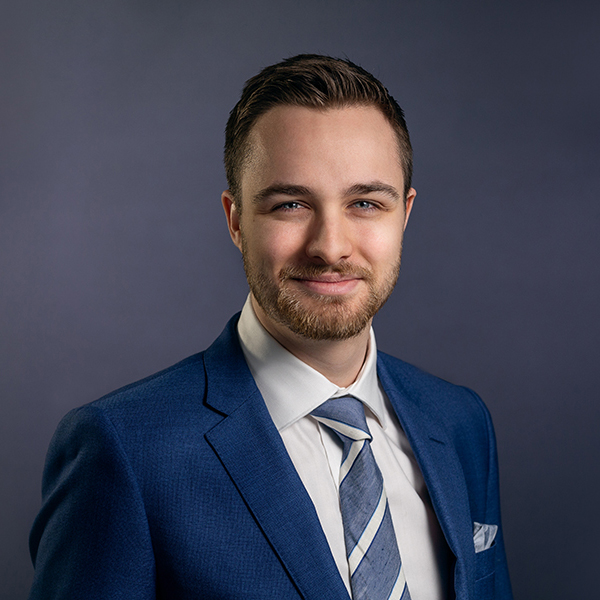 “Well he cast his eyes upon her
And the trouble soon began
And Leroy Brown learned a lesson
‘Bout messin’ with the wife of a jealous man.”
– Jim Croce, “Bad, Bad, Leroy Brown”

We live in the age of the megacap stocks. Industry players so large and influential that they cannot help but polarize spectators; one side of the fence scramble to invest and see size as opportunity, the other vow to cut them down to size. Generally, the companies themselves would prefer to support the former.

But much like Leroy Brown learned with Doris, acting too big to touch will eventually draw the attention of something more frightening than a jealous husband – legislation.

Although media attention and speculators have cast the light of anti-trust measures and breakups as inherently negative for stock prices, in this note we’ll explore the case that break ups may benefit investors and some historical cases to support this.

The curious case of AT&T

An interesting piece from HSBC led me to this story, dating back to the ancient times of the 1980s.
Amongst the neon and spandex, telecom giants IBM and AT&T were under investigation due to their increasingly monopolistic control of the market and anti-competitive behaviours. In the end IBM skirted around being broken up, and AT&T was broken up into what was dubbed the ‘Baby Bells’, a collection of smaller operators who ended up being main competitors to IBM in the computer industry.

If you take a look at the chart below, you’d be grinning if you were an AT&T shareholder for the next 10 years, whereas the performance of IBM left stakeholders holding their hats. 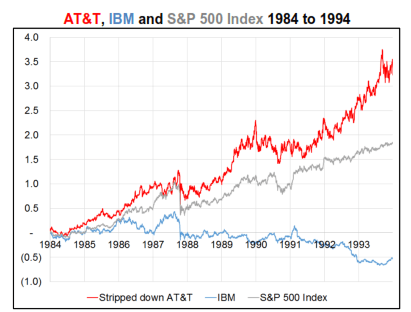 And AT&T was not all you held, in fact the breakup led to 8 different companies which have since evolved into 10 stocks today. A clever gentleman from MIT worked backwards and ascertained that if you had $500 worth of AT&T pre-breakup, the resulting portfolio of stocks would be worth $40,322 in 2014.

Perhaps one lesson from this is despite initial negative news (such as an entire government coming after you), if you valued your initial investment in a company just hold on tight and ride it out for the earnings. But there’s more to the anti-trust story.

You’re a friend, you’re a (Pay)Pal

Cast your mind back to 2015, when eBay announced that after 13 years as a corporate partnership, eBay and PayPal were to split. Shareholders received 1 PayPal share for every eBay share they owned as part of the split, and the market of course was rife with speculation about the potential impacts this would have on investors and share prices. And then, on the first day of trading, PayPal shares jumped 8.3%.

This is an interesting example of a short term benefit to a ‘sum of parts’ approach that generally only starts to kick in the medium and long term.

Taking a look above, enough though you had a wild ride as an eBay shareholder immediately before the split, over the last 5 years the value of the initial investment would have approximately doubled, assuming you hung onto your eBay and PayPal shares the whole way through to this year.

An eye on future splits

With the FANG stocks currently taking up approximately 13% of the S&P 500, it’s not surprising to see that some interest is building around anti-trust measures of the megacap tech giants. The US senate inquiry into tech’s top CEOs was one hint of what the future may hold, and in October the Senate panel voted to subpoena those same executives for round two at Capitol Hill.

The election may be a double-edged sword in this matter; on the one hand, Democratic representatives have voiced the desire to take large tech companies to task, on the other both parties have bigger – more orange – priorities to focus on. For now, we may see the pressure take a slight hiatus.

But investors may not have to fear these potential break-ups, in fact it may be an opportunity waiting just over the horizon.

Consider Alphabet (NASDAQ:GOOGL) for a moment; with Google’s near monopoly on search-engine usage, it’s a prime candidate for anti-trust action.

Over 95% of Alphabet’s revenue comes from Google, but of that around 65-70% comes from Google Search and YouTube advertising – and just like that, there’s two splits. There is an enigmatic section known as ‘Google Other’ in Alphabet’s annual reports that accounts for ~13% of total revenue, likely off-shoots, acquisitions and other apps that don’t quite fit into the broader Google ecosystem. Don’t forget Waymo, the oft forgotten self-driving car unit which Morgan Stanley valued at USD 30 billion this year.

Only taking this briefest of examinations, there’s potential for at least half a dozen splits from the Alphabet group, all in relatively different areas of technology; you have advertising, media, self-driving cars and more.

Why is this a benefit to investors?

Because we value what is clear to us, from risks to potential upside. Alphabet is a colossus, and like a colossus it’s difficult to get a good look at all of it at once, to make heads or tails of the different components. As separate entities, we can see clearly the growth runway of each business, we have a better look at the management team, we can pick and choose what sector exposures we want rather than take on the entire technology sector as a whole.

In short, the potential in the ‘sum of parts’ valuation model comes from investors valuing a more straightforward ownership of a company than a small part in a bloaty conglomerate.

Needham & Company’s equity research team came out saying if Alphabet is broken up, the total value of all the component companies could rise by up to 50% – GOOGL rose 1.3% following that note.

As with anything, not all opportunities are winners, not all splits will create value in the long run.

However, if we look historically and consider the logistics of a split in light of anti-trust measures against the megacap stocks of today, there are clear avenues in which an investor could find success. We’ve all likely been trained to not trust the phrase “we can still be friends” after one high school breakup or another, but in this case a split may be the best thing that could happen to you.

READ TIME 4 mins READ MORE
The largest Free Trade Agreement in the world On 15th November, Australia signed its commitment to a free trade deal almost a decade in the making: The Regional Comprehensive Economic Partnership (RCEP). 15 nations in total signed the RCEP, which...
READ MORE

READ TIME 6 mins READ MORE
After falling victim to COVID-19 in Q2, spending on online advertising has posted a strong recovery moving towards 2021. Today we follow this recovery and consider if we can use where this advertising spending is going, between regions and sectors,...
READ MORE

READ TIME 5 mins READ MORE
Delving into the world of ESG is an eye-opening investigation, as the wealth of data and content that is now being assessed and incorporated into modern portfolio investment practises is enormous.
READ MORE