Equities
There is nothing like the bean
16 Jun, 2020
|
READ TIME 4 mins
Rod Skellet
Equities Investment Strategist

Much has been made during the discussion on the US/China trade war, of the importance of Soybeans from both a political perspective as we get closer to the US election, and how this commodity has become a powerful weapon for China in the trade negotiations with the US. In this note we take a deeper dive into the commodity of soybean and the global supply chain and why it could have a significant impact on the US elections.

The vast majority of soybean is used as a form of protein to feed livestock, notably hogs and poultry. The importance of China in the global market for soybeans is linked directly with the country’s surging demand for meat as their diet has increasingly shifted from rice to meat based protein. China’s production of meat – from poultry, hogs and beef – has increased 250% since 1986 (according to South China Morning Post) and is expected to continue to grow. China’s problem is that it is unable to produce enough feed for these animals, and hence it relies on the importation of protein in the form of protein meal to feed to the livestock.

68% of global soybean is processed into soybean meal for use in feeding livestock, with another 17% used in production of soybean oil used in cooking oils & margarine and 15% sold as whole beans.

The largest producers of soybean is the US with 34% of the global market, followed closely by Brazil with 29% and Argentina 18%. 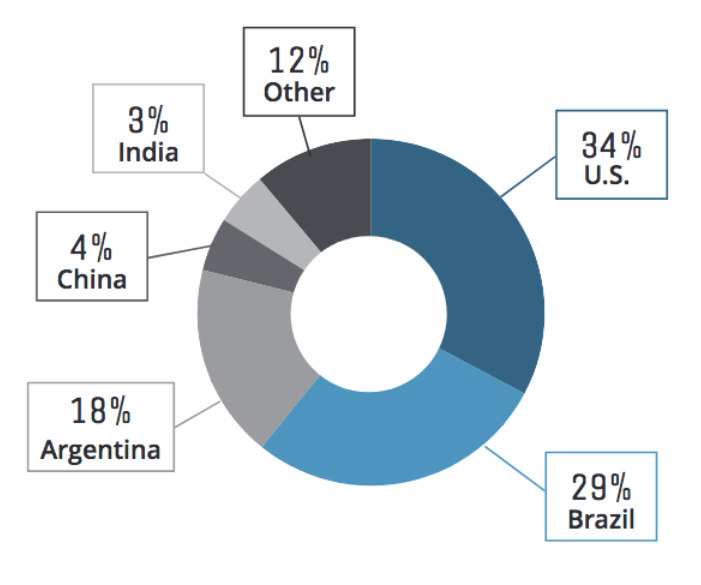 The importance of China as a buyer cannot be understated. In dollar value China was circa ten times greater than the second biggest importer the European Union with $39.6bln v $3.7bln. Dominating global imports, China now accounts for two thirds of the worlds consumption and from the US perspectives. Up until end of 2018, it was the second largest dollar value export to China after aeroplanes.

The recent trade war between China and the US has thrown this market into disarray, starting with China putting a 25% tariff on US soybean exports. For the 2019/2020 year, US exports to China are down circa 80% below their average for the past three years. Excluding a brief blip in December, when there was a thawing of tensions, the huge fall in exports has the ability to really hurt the soybean producing farmers of the mid-west. Illinois, Iowa, Minnesota, Nebraska, Indiana, Missouri and Ohio farmers are taking a double whammy, with exports down 80% and the price down 13.5% from $10.82 a bushel to $9.35. 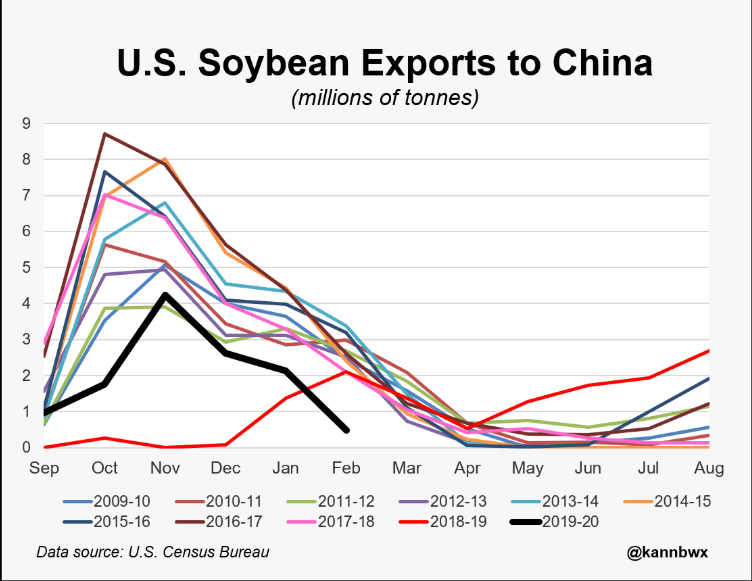 The role these farmers have in the trade war is increasing daily, as they are more likely collateral damage if they do not voice their concerns. No doubt China hopes that by the pain borne by farmers will translate into political pressure, as Presidents Trump re-election chances may very much hinge on the mid-west states that surprised pollsters by voting for Trump in 2016, by lobbying the Trump administration to step back from further escalating the trade war.

Making the situation worse for US farmers and the Trump Administration in regards to its ability to navigate this trade war with some degree of success, is Brazil. In terms of soybean, Brazil has been stepping up filling the void left by the US. Prior to the onset of COVID-19 in the last 2 months, Brazil’s soybean industry has been buoyed by a record harvest and a weaker currency. So, they can make up a significant portion of the tonnage the US was expected to fill, and at a cheaper price to boot. 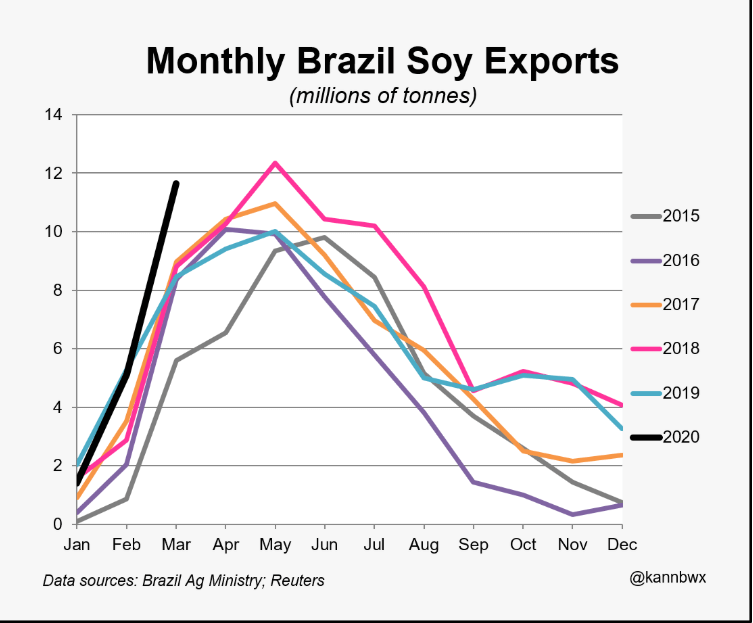 The ability for Brazil to eat into the US Soybean’s export market share to China, puts additional pressure on the Trump administration to do a trade deal that brings China back to the table. As soybeans sit in warehouses around the US, the price outlook continues to deteriorate, which will again add more pressure to the negotiations.

US spot for Soybeans on the CBOT on Friday 12th June 2020 was at $340.70 while the July futures was even weaker at $320.12. With grain elevators around the country being full, similar to the oil situation we had 2 months ago, the farmers are facing the horrible decision of ploughing the recent crop back into the ground. If storage can be found, the price to store soybeans has jumped 40% in the past 18 months as the Soybean farmers fight with corn, wheat and sorghum growers for the remaining space.

With US soybean farmers making decision on whether to plant this year’s crop between late April through to June, and the harvesting from late September through to early November, these farmers will be very relevant and no doubt very vocal in the lead up to the US election. How the Trump administration deals with this potentially critical swinging group of farmers will be interesting to watch.