In this note, we have taken a look at the gold sector from a macro perspective, looking at previous historical moves and the current economic conditions, to gain some perspective whether the move above US$2,000 per oz is the beginning of a more substantial move or the final move in a slow grind up.

In the history of gold mining, the world has seen circa 200,000 tonnes of gold produced or 6.5 billion oz which at current gold price of US1,925 per oz gives a valuation of US$12.512trillion. Given most of this gold still exists and is available for sale, makes the comparison to the value of equity (S&P500 $28.477 Trillion) and debt (US$ debt $54.3 Trillion) an interesting optic if only for folly.

At the turn of the twentieth century, from 1882 to 1933, when economies were considerably less complex, the US$ was pegged to the gold price. It was known as the Gold Standard. In simple terms: your paper money was always able to be exchanged for a set amount of gold. In 1971, President Nixon eliminated the gold standard completely, and since then the $US dollar has used a fiat currency, in which dollars are valuable simply because the government says they are.

The move away from the Gold Standard was not without its critics. The Hon Howard Buffett US Congressman from Nebraska (and father to a reasonably well-known later day investor called Warren) penned an article to the “Commercial & Financial Chronicle” in May 1948, which highlighted the perils of allowing the government control over paper money economies, which he believed invariably leads to collapse. If you have not read the article, go to the link below. It makes sobering reading when one considers the level of Quantitative Easing that is going on globally now.

Now, the author is not proposing a return to the gold Standard. The economic chaos that would ensue would create a significantly bigger problem than the world currently faces, due to the inflexible nature of such a standard. What is worth discussing though, is where could gold and/or gold companies trade given the outlook for inflation, deflation and long-term interest rates. In terms of previous gold rallies, this current move from Dec 2015 to present is one of the most modest rallies in the last 50 years. I recall in 1979, my father (a conservative engineer), buying gold at $746 per oz only to watch it fall back to $280 per oz two years later. The bull run from 1976 to 1980 was the strongest in 50 years and puts the current move in perspective. 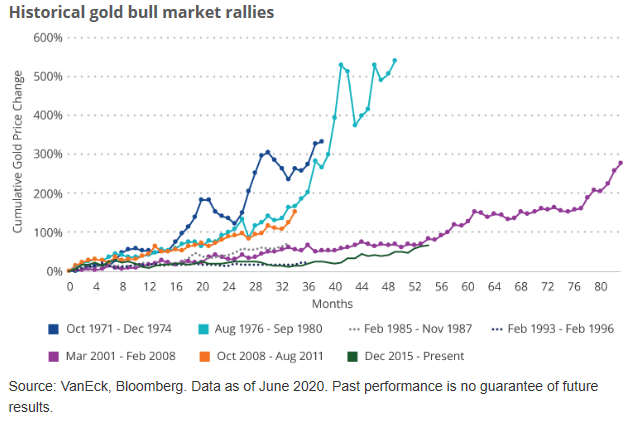 The gold market rallies in the past have usually been linked to two types of economic scenarios: inflationary and deflationary. In the 1970’s, when inflation was running at between 10% and 15%, interest rates were also at record levels, providing the driving force behind gold’s strongest move. With the current economic environment less likely to produce an inflationary scenario and interest rates at record lows, a deflationary scenario seems more likely. As central banks keep real rates low and governments’ need to fund economic stimulus continues to climb, the debt burden from governments and corporates alike has exploded. State deficits as a proportion of GDP are at unprecedented levels, and with the debate between Modern Monetary Theorist and traditionalists wondering if this debt mountain will ever be repaid, the concern over the true value of currencies has investors worried. 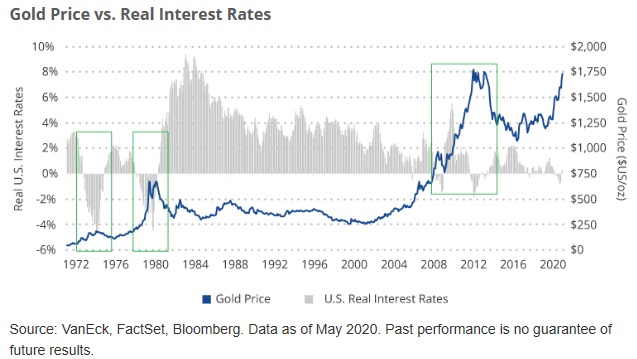 When investors get concerned their attention invariably turns to gold.

Now apart from buying physical gold directly which you can do at the Perth Mint, investors can look at two ETF’s traded on the ASX. PMGOLD (Perth Mint Gold) or ETF Securities GOLD ETF. Both of these instruments track the gold price directly. In addition you can look at listed gold mining companies.

The following chart indicates the performance of two Australian gold companies performance indexed to the gold price over the last 12 months. 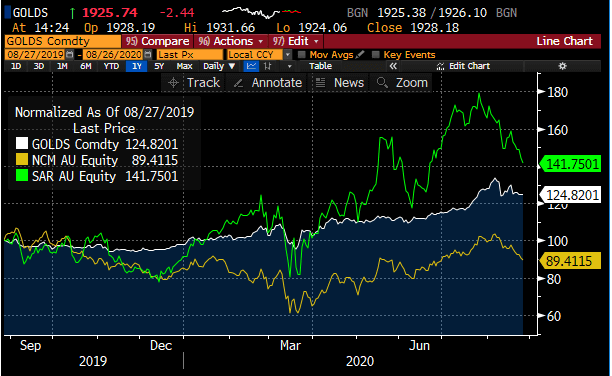 Despite being the largest gold producer in Australia Newcrest (NCM) has underperformed, despite having arguably the most profitably gold mine in the world Cadia as one of its assets. Cadia has an All In Sustainable Cost of $170 per oz according to NCM June quarterly report, although across the group this number is $878 per oz. Saracens (SAR.Ax) has just released record production of 520,414oz at an AISC of A$1,030 per oz for a record profit of $258m. Both of these companies will look to have improved earning if the gold price continues to trade in and around US$2000 an oz.