Following on from our morning note on water rights, we take a look at the driving forces behind the weather in Australia and have a look at how weather can impact certain stocks and sectors.

The agriculture sector is directly impacted but the weather also plays a significant role for our big Iron ore producers in the Pilbara and the insurance sector with natural disasters like flooding and destructive cyclones increasing depending on the dominant force in the weather pattern at the time.

Appreciating where we are in the current weather cycle, and the likelihood of certain events occurring will have a direct impact to the financial returns of these stocks and your portfolio’s performance.

These are all terms that are used by  meteorologists when describing current weather and when forecasting future weather events.

It is important to understand how these various weather phenomena interact, as they impact rainfall, food production, extreme weather events like bushfires and cyclones along with water restrictions and food prices around the country.

The majority of weather is determined by sea temperature and where the large portions of warm water and cold water are located.

As we all recall from our science classes in school, warm air and warm water rises, while cooler air and cooler water sinks.

Who can recall times when you jump into a pool on a warm day and the water at the top of the pool is relatively warm, but when you dive deeper, at a point it gets much cooler?

In the waters around the equator, this influential natural boundary between the warmer upper layer and the cooler lower layer is known as the Equatorial Thermocline.

This huge body of water between the continents of Australia and South America is pushed around by air currents.

In normal years, the southerly air stream known as the Roaring Forties and Furious Fifties (designated by the respective lines of latitude) travels easterly from Southern Australia uninterrupted until the land mass of South America forces the air north where at around the equator it hits another airstream known as the North Pacific High, which is driving air down North American west coast.

When these two airstreams meet along the equator, both pressure systems converge, and the air stream starts heading west.

This westerly airflow pushes warm surface water away from the coasts of Ecuador and Peru towards Indonesia and northern Australia.

The weather events known as El Nino and La Nina are created by the relative strength or weakness of this airflow and the location of the warm water mass.

During an El Nino event, the westerly trade winds on the west coast of South America decrease as cooler than normal air falling over Indonesia and North Australia pushes east creating increased convection and rainfall over the central pacific and dryer conditions over Australia and a reduced chance of rain. 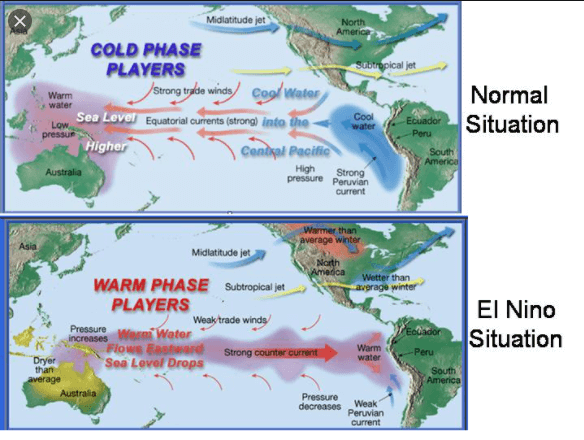 In Australia, El Nino results in more cloudless days, less rain and higher daytime temperatures which results in higher evaporation rates and reduced water storage. For our agriculture industry this has a huge impact, while the city folk have to drive around in dirty cars and suffer dry lawns.

In addition, the lack of cloud cover results in lower night-time temperatures and an increase in the number of frosts. In southern NSW and Victoria, the incidence of frost rises between 15 to 30% in El Nino events according to the BOM. This again impacts the fruit, nut and wine growers.

Treasury Wine Estates (TWE) and Costa Group (CGC) are two companies whose costs rise as a result of El Nino events. The price of water rises during drier times which impacts the operational cost base of farms while the likelihood of increased frost means that additional costs are incurred in covering wine and fruit crops to limit the impact of the higher frequency of frost.

La Nina is the normal situation, but on steroids.

The warmer air travelling west from South America gets stronger and pushes all the way to Indonesia. The air pressure over North Australia decreases and the warm moist air rises where it meets the upper cooler air and condenses and falls as rain. La Nina normally results in increased rainfall across Australia during spring and summer and can last for several years.

Currently, the La Nina outlook is very strong for Australia which suggests a wetter than normal summer and better growing conditions for farmers and a decreased chance of significant bush fire events. 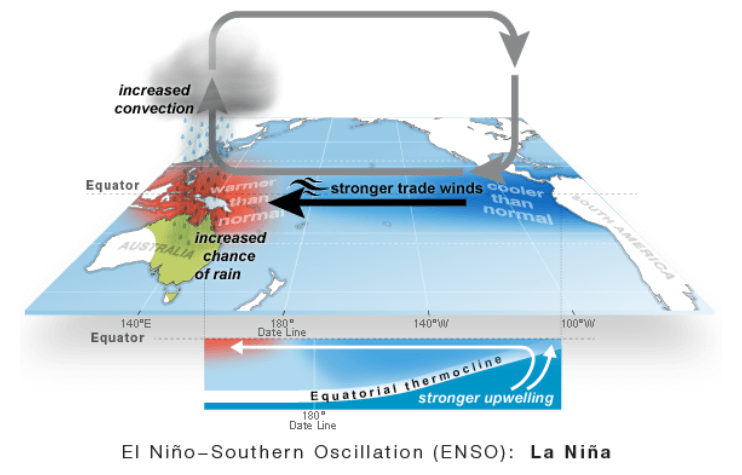 Impacts of a La Nina event have both positive and negative impacts on the Australian economy.

The higher rainfall is welcomed by farmers as well as several of the listed agriculture companies on the ASX.

Grain Corp (GNC) will benefit from a record winter grain harvest which will enhance earnings, while;

Nufarm (NUF) should also benefit as the sale of herbicides increase as weeds also thrive in wetter conditions.

Australian Agricultural Co (AAC), Australia’s largest beef producer will also benefit, as the increase feed available for grazing in the top end should improve herd productivity, but the cost of herd replacement is high due to the impact of the 2018/2019 drought, so costs are higher for restocking.

The following chart illustrates the performance of these agriculture stocks as compared to the ASX 200. With the exception of Nufarm, all the stocks have outperformed since the development of the La Nina pattern and the breaking of the drought. 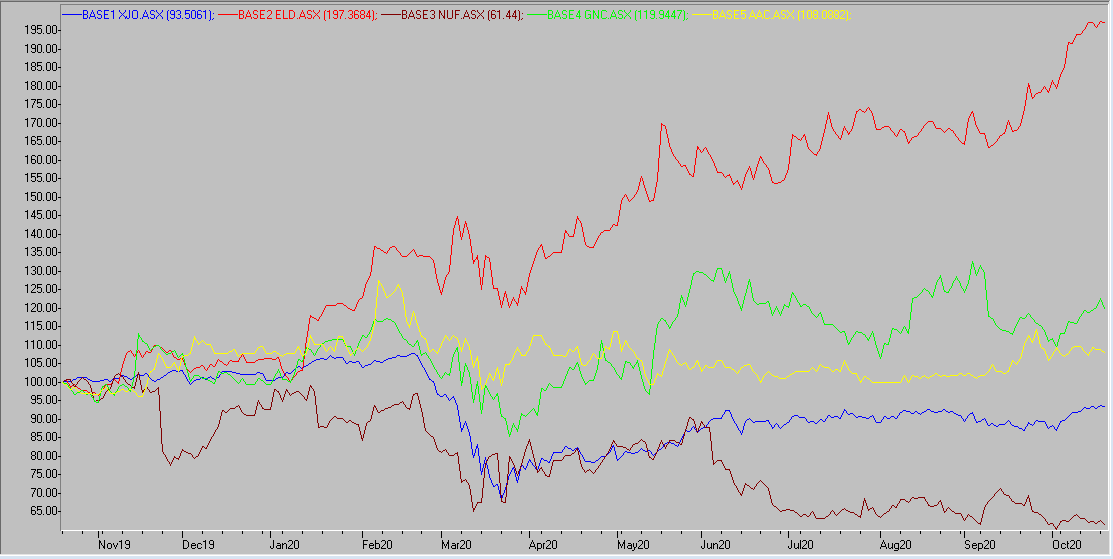 The sea surface temperature in the Indian Ocean also has a significant impact on Australia’s weather.

Known as the Indian Ocean Dipole (IOD), this phenomenon describes the movement and change in sea temperature in the north Indian Ocean.

In its neutral phase, the IOD has no impact on the weather in Australia.

In its negative phase, stronger than normal westerly winds drive warm current from Africa and concentrates it off the north west coast of Australia and Indonesia, where it condenses and falls as rain.

This increases the chance of rain across Western Australia, Southern NSW and Victoria. 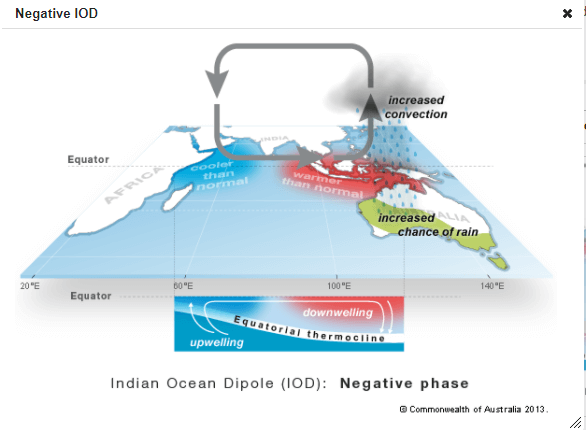 During La Nina events, the risk of flooding and destructive cyclones increases, especially in the north of Australia.

The iron ore sector is directly exposed, with the movements and loading of bulk ore carriers halted during these extreme weather events.

During a La Nina event, cyclones in the north increase from 11 to 14 cyclones per year, on average. This can have a direct impact on iron ore shipments.

Earlier this year, Cyclone Damien battered the ports of Cape Lambert and Dampier and dumped heavy rain on its mining and rail network, impacting both production and shipments.

How the La Nina and Indian Ocean Dipole interact is one of key determinants driving weather patterns in Australia. 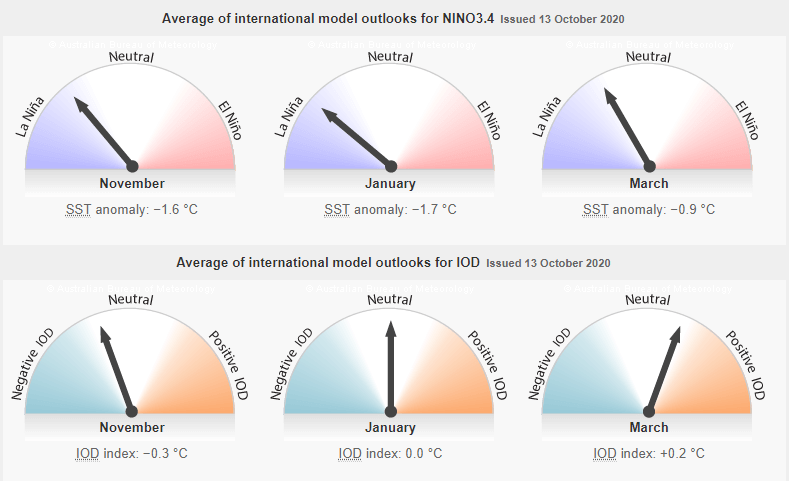 The last sector I would like to highlight is the insurance companies.

Floods and cyclones have a direct impact on communities and as well as significant impact on the earnings of our listed insurers.

This hits the bottom line of not only households but also the business community which is an additional cost to bear over and above the impact of COVID-19.

It’s not only flooding that impacts, but the increased prevalence of east coast lows and hailstorms during a La Nina event, which create pockets of severe damage along the coastal fringe where the majority of Australia’s population live.

To emphasise the importance that weather has on business, one needs to look no further than BHP, Australia’s largest mining company. In September they released a detailed report acknowledging changes in climate and the impact that has on its operations and how they will adapt their operations to make them more resilient so they can continue to deliver the materials the world needs sustainably into the future.

READ TIME 5 mins READ MORE
The equity market is the subject of a lot of polarization at the moment. In the minds of many vocal commentators, everything is either the next “big bull run”, or another sign of a bubble. Valuations are either stretched beyond...
READ MORE

Implications of a rising AUD on ASX shares

READ TIME 4 mins READ MORE
The AUD/USD has appreciated by 33% since March 2020 and has brought foreign exchange (FX) risk into the forefront of the minds of investors looking at US equity and fixed income markets. We have discussed the factors which have driven,...
READ MORE

READ TIME 4 mins READ MORE
Yesterday, Commonwealth Bank (CBA:ASX) was the first of our major banks to report 1H21 results, firing the starting gun on what will be several weeks of news coming out of the largest ASX sector. In light of this we thought...
READ MORE