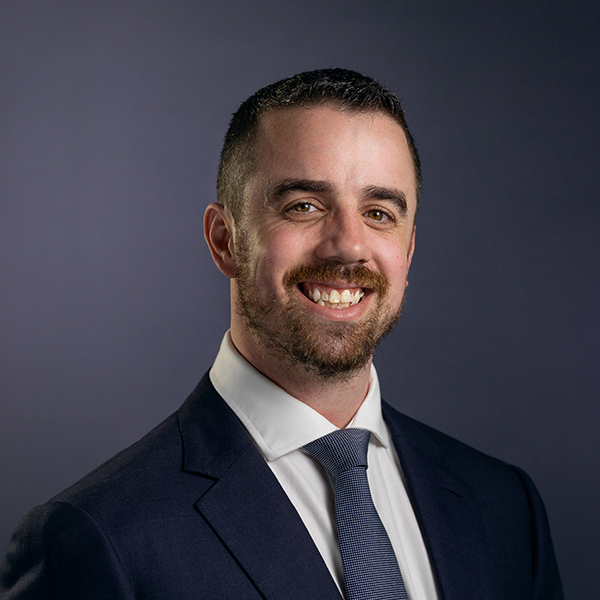 “And we’re falling all over again,
Like a flashback to way back when,
Back when we were us.”
Luke Combs (2019)

It is becoming a consensus view that an Australian economic recovery, as well as a global recovery, hinges upon people:

In Australia, both our national jobs and employment data and consumer confidence data were released last week.

The Westpac-Melbourne Institute Index of Consumer Sentiment – try saying that three times quickly – fell 6.1% to 87.9 from 93.7 in June.

The survey was conducted in the first week of July – across the nation – and covers the period after Victorian Premier Andrews announced Melbourne lockdowns – but reports before the latest Sydney clusters were reported.

The result in confidence reverses all June’s gains, taking the Index back to the weak levels seen in May, though above the extreme low of 75 seen in March. 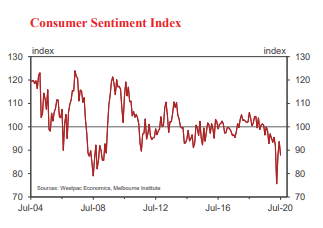 It may seem simple, but I think it is worth mentioning that sentiment has been rocked by the resurgence of Coronavirus cases over the last few weeks.

After averaging about ~10 cases a day over the last month, new cases have lifted significantly to ~200 per day during the July survey period.

State-level readings of confidence underscore the importance of virus-related developments to consumer behaviour:

Westpac economists highlight that while previously surveyed respondents were confident the damage from the virus would be short-lived, this set-back over the last month raises significant doubts over our ability to contain the virus permanently, limiting the extent to which the economy can return to business as usual.

The renewed outbreak points to a slower and more difficult path ahead for foreign education, hospitality and tourism sectors, all of which may see longer lasting restrictions even if the latest outbreak is successfully contained.

The headline figure looked promising, with employment rising by 211k persons and hours worked increasing by 4% in June from May’s figures.

On face-value, this would show a clear turn-around since the 870k jobs that were lost in March-May period, and hours worked having fallen by 10%.

Where I seem to be contrarian

I wrote my summary of these results – what you’re reading below – before reading any other economist or journalists’ interpretation of the results. Having read several views before writing this missive, I’ve noticed that I seem more negative than average.

This is unusual, as I’m usually more optimistic.

The part-time employment gains were largely offset in the headline unemployment rate as the “new” jobs added were people that had left the labour force in March-May as they were not employed or unemployed and looking for work. Hence, they have re-commenced work.

I see this as negative long-term for our domestic economy as seeing full-time employment drop in June when we were meant to be re-opening is indicative of protracted and possibly permanent unemployment.

This puts heavier burden on society through emotional distress to individuals and families, and longer-term requirements on government through social welfare and unemployment benefits.

To put this employment “recovery” in perspective, here’s what the bounce back looks like – with the small up-tick being June’s result. 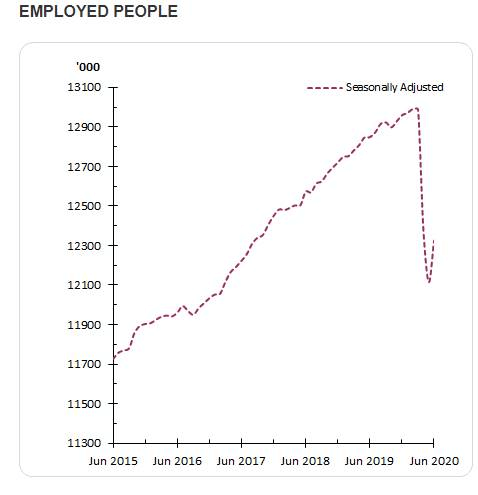 I worry over the full-time employment decrease as being indicative of a trend we mentioned last week in a discussion of US employment trends.

Employment takes longer and longer to bounce back

The below graphic is of US labour market recoveries, with the magenta, black, brown, blue (the last 4 crisis) taking longer each time to recover. 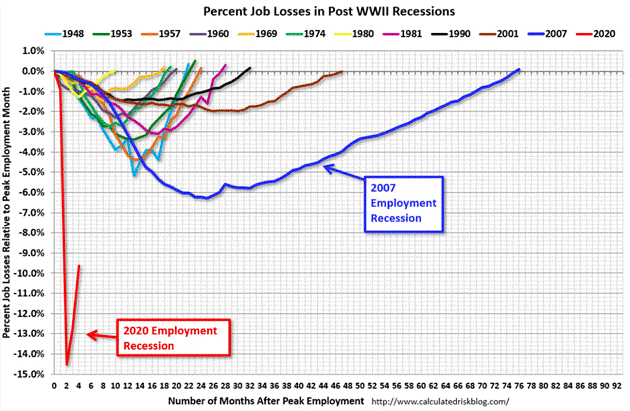 This is because of the evolving and increasingly changing nature of global consumers.

Markets are able to morph quite rapidly in response to technological innovations and changing consumer demands, even now more than ever through the near-immediate awareness via news and social media platforms.

We note how quickly certain drug/vaccine producers have become household names during this crisis, similarly, programs such as Zoom that have become overnight sensations for business use.

Tying the two together

Both consumer confidence and employment data are highlighting that a return to “normal” or pre-COVID levels of activity and employment are some time away.

Both datasets will remain key in forecasting our future economic welfare and prosperity – as:

As uncertainty remains, financial markets could continue to trade with more volatility than historical averages – as outlooks should change more rapidly in response to forthcoming data – be it economic or health specific.

As always – we remain nimble and mentally flexible to adapt our views to the ever-changing world.